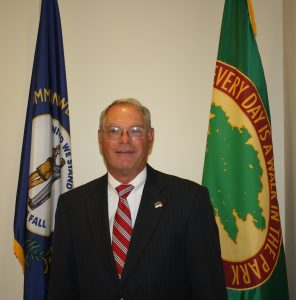 My wife, Lynne, and I have been residents of Edgewood since 1974 and have reared four children here thus witnessing and enjoying the growing up years of a full generation of residents.

Prior to being elected Mayor in November 1993, I served on city council from 1976-1982 and 1990-1993. I have also served as president of the Northern Kentucky Municipal Government League, Manufacturing Agents of Cincinnati, Northern Kentucky Area Planning Council, Covington Catholic Boosters and the St. Pius X Holy Name Society. I have served as a member of the following organizations: OKIRCOG Representative, the Kentucky League of Cities – Legislative Committee, the National League of Cities – FAIR Committee, Kentuckians for Better Transportation, Disaster Emergency Services, Knights of Columbus, Edgewood Fire District, and the Sanitation Districts Committee for Storm Water Run Off. I was also elected as the Outstanding Elected Official in 1998.

Since taking the oath of office in January 1994, I, and the city staff, have endeavored to serve, to protect and to improve the quality of life for the people of Edgewood. Our city has a residential population of approximately 8,500 but with seven schools, a hospital and a neighborhood business community, our service population is substantially larger.

I invite and encourage you to view our website in order to become better acquainted with the city. All coming city sponsored events and recreational activities will be listed as they are finalized so you may see first hand what may be of interest to you and your family.

Whether you’re a resident or visitor, if you have any suggestions please contact us either by phone or through this website. Thank you visiting www.edgewoodky.gov and please, come often.